About those anti-Trump Protestors… 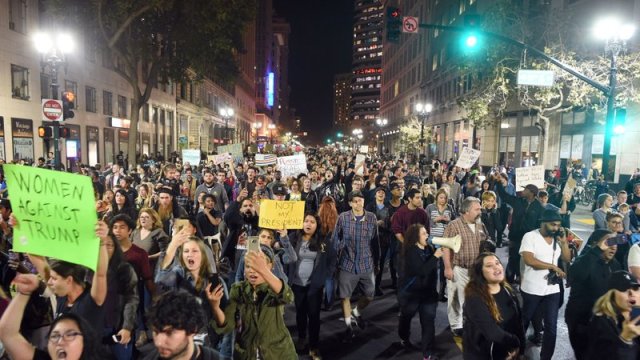 I know you have some time before you take office, and you’re still learning all that this new job will entail. But even in these early days, you have a chance to heal the wounds of the campaign, to act presidential. I am disappointed that you have chosen not to.

Many people are not happy with your election, and they have taken to the streets to protest. This makes me and many others uncomfortable because it seems an affront to the peaceful transition of power. But what makes me more uncomfortable is your response.

Americans have a constitutional right to peaceably assemble, and, so far, most of those assembled have been peaceable. I hope they remain so.

Your response, issued via a tweet, was to complain that they had treated you unfairly. Perhaps, but it doesn’t matter. You are about to become the leader of our government, a government of the people – all the people, including those who protest against you. They are your protestors. You now represent them — indeed, you work for them — just as much as the Ku Klux Klan members who are planning a victory parade for you in North Carolina.

As a candidate, you can divide and win, as president, you cannot.

Reports, mostly on social media, have relayed incidents – fortunately isolated ones – in which people claiming to be your followers have harassed people of color. While these may not represent the feelings of all your supporters, some apparently believe that your election makes hatred, bigotry and threats of violence against minorities acceptable.

As president, you must tell them it doesn’t. You owe the country that. How you respond sets the tone for your presidency and the America it will oversee.

You were elected president, but you were not popularly elected. More people voted for your opponent. That is the way our system works, and it does not delegitimize your presidency. It does, however, underscore the division of our nation, a division that on election night you pledged to heal.

Your tweet in response to the protestors flies in the face of that pledge. America cannot succeed – it cannot be great — if our elected leaders simply pander to one group that feels excluded from society by denigrating or ignoring the concerns of another. You won, in part, because your opponent failed to recognize this.

It may, indeed, seem unfair that many people are so upset by your election that they are openly protesting it. You are not the first president to be treated unfairly. Just ask the man whose hand your shook in the Oval Office this week (or, for that matter, any of his predecessors).

Your tweeted response also included one of your favorite themes: it was the media’s fault. As a creation of the media yourself, you know better. It may be convenient to have a handy scapegoat, but you cannot blame the media, foreign governments, immigrants or any other outsiders for the problems that will occur under your administration. Your party will dominate all the houses of government. It’s been almost a century since any president has had such control. That is a tremendous opportunity, but one that doesn’t allow for excuses. Just as the successes will be yours, so will the failures.

You preside over an America in which an angry majority has reasserted itself, and that is its right. Our nation, however, was founded on the principal that government also protects the rights of the minority and the disenfranchised. That is how our democracy has endured. You are now the line that stands between that ideal and mob rule.

People are protesting not simply because they lost an election, but because you campaigned on the message that they did not matter, that by excluding them, America can be “great again.” That may have been a successful campaign strategy, but it has made your job harder. As president, you must address their concerns. You must recognize the growing diversity of our nation and the strength that’s derived from it. In short, you must be America’s president, not the mouthpiece for the anger of some.

Those days are over. You got the job. Now, you must live up to it.

Loren Steffy is the author of "George P. Mitchell: Fracking, Sustainability and an Unorthodox Quest to Save the Planet" (to be published in October 2019), "The Man Who Thought Like a Ship," and "Drowning in Oil: BP and the Reckless Pursuit of Profit." He is a writer at large for Texas Monthly, managing director for 30 Point Strategies and an executive producer for Rational Middle Media.
View all posts by lorensteffy →
This entry was posted in Uncategorized. Bookmark the permalink.

2 Responses to About those anti-Trump Protestors…